Demonstrating the strength and uniqueness of its industry solutions, Atturra has won the 2022 CRN Australia Impact Award for Platform Innovation.

The ASX-listed IT Services company [ASX: ATA] won the Platform Innovator award for its ePlanning Integration Solution - which connects New South Wales councils to the Planning Portal of the NSW Department of Planning and Environment (DPE) to fast-track and automate the processing of thousands of Development Applications (DA) without any errors.

The award ceremony, held on the beautiful Gold Coast, was attended by more than 200 decision-makers from the Australian IT industry. 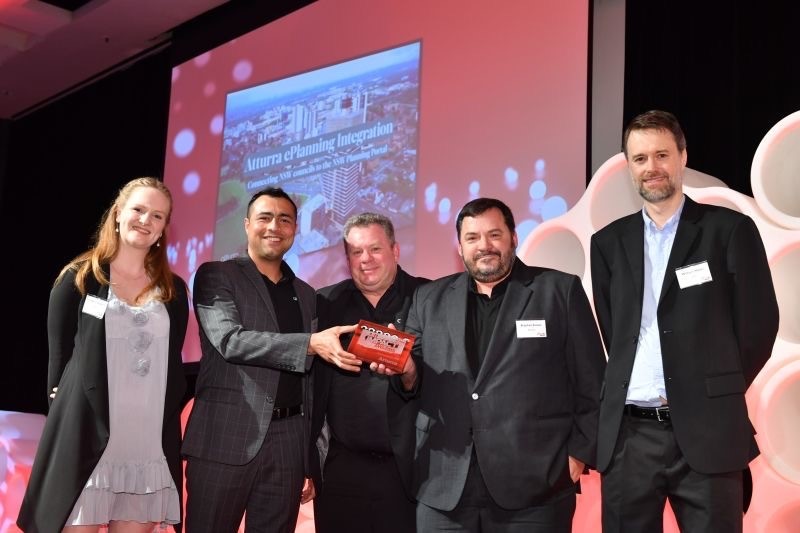 Meeting a need
The project was sparked by a significant need that existed within local governments, which was to move away from the manual processing of DAs. Traditionally, DAs were submitted using hard copies of several reports and forms. In mid-2021, the NSW Government Department of Planning and Environment (DPE) launched the NSW Planning Portal. This allowed citizens to submit their DAs digitally with soft copies of all the documents, including plans and reports.

However, the local councils were unable to unlock its full potential because their ERP systems were not integrated seamlessly with the portal. This led to the creation of this bespoke industry solution - Atturra ePlanning Integration.

The Atturra Data & Integration team worked hard to swiftly map the API integrations to the Property & Rating workflows of all the major ERP platforms used by the local councils. The team then created reusable connectors for all major APIs.

Benefits delivered
Since the project went live, the ePlanning Integration solution has received considerable positive feedback from local councils. Many have indicated they now spend 70 per cent less time in the processing of DAs. This is a significant saving as most councils process thousands of DAs every year. The Data & Integration team has recorded a staggering 95% drop in errors due to the removal of manual processes.

Following this remarkably positive reaction, Atturra is extending this IP to more NSW councils that are keen to achieve similar benefits. This work will be completed over the next 12 months.

Particularly positive feedback was received from Albury Council which was one of the first to successfully integrate with DPE's Planning Portal.

“Our collaborative solution with Atturra for ePlanning is a key initiative for the (Albury) Council to grow its online lodgement capability,” says Stuart Ross - Team Leader, Information Management, Albury City Council. “The solution has simplified and streamlined the development application process for our community, improving productivity and enabling the Council to deliver high-quality customer experiences. This is a big win for us.”

This ePlanning Integration solution is delivered as a managed service and can be deployed on-prem or on the cloud regardless of the size of the council. It can be deployed in weeks, requires no training or hiring from the council, and is designed to be compliant with the current and future updates by the DPE as well as the ERP vendor.

Technology partners
To develop this , Atturra worked closely with one of it's most strategic Partners - Boomi.

Boomi has been a Gartner Magic Quadrant leader for enterprise iPaaS for eight consecutive years and Atturra has been their APJ partner of the year three times in the last four years. The team engineered the solution on Boomi, enabling JSON to XML conversion and vice versa. Given their integration expertise and one of the large Boomi teams in APAC, they were able to create a lot of ongoing value for the councils.

Atturra also worked closely with TechnologyOne, which provides Australia's leading ERP and Property and Rating solution, to build Planning Portal connectors for their P&R platform and devise a packaged solution which is easy to buy for the councils.

Technology One’s General Manager for Local Government was very pleased with the relationship.

“Atturra’s ePlanning Integration is a great example of a solution that leverages the strength of TechnologyOne’s API Compliance Connector to build a custom SaaS offering,” he says.

“The ePlanning Integration adapts to the changing NSW Planning Portal capabilities to automate the processes both to and from the Portal to TechnologyOne’s Property and Rating. This automated API integration ensures fast and accurate carriage of data from applicants to councils for our clients.”

A strong future
The award shows how well placed Atturra is to spot opportunities for growth and ways to deliver increased value to our customers. Atturra CEO, Stephen Kowal, expressed his pride in the award win. “I am super excited that Atturra won the CRN Australia Platform Innovation of the year award,” he said.

“This award is very special to Atturra as it reflects the focus we have put into developing citizen-centric IP in addition to our core services.”

Jason Frost - Executive General Manager, Atturra Data & Integration added, "Atturra understands integration, Local Government, and Australian values - and that makes us one of the best-placed organisations to build and scale solutions like this. We're happy to see the industry and channel media recognise the solution for its scale and simplicity. We're always exploring similar proprietary solutions that change the lives of Australian people, governments and businesses."

The team can be reached at nsw.eplanning@atturra.com for further questions and comments.